Woodstone is a local multiplayer competitive strategy game where you strive to control the board and deliver devastating blows to your opponent!

Music for this game created by Jack Laurila.

To start the game, simply click the Run icon on gong near the top of the screen. The timers on either side of the screen show how long until each player can act. Once a player's turn begins, the gong will show a Pause icon and player can do a certain number of actions before ending the turn by clicking the gong once again.

To cancel a new unit, right click the new unit on the same turn it was created, this will refund the action and allow the originating unit to be used again. Right clicking an old unit will mark the unit to be terminated upon the end of the turn.

If your units are in contact with an enemy group at the end of the turn, they are in combat. Combat destroys both your attached units and some of the enemy units, with an advantage to the attacker. First, all units that are part of the attacking group are counted up, this gives the Attack Power. Secondly, all enemy units that can be reached within the Attack Power number of hops from the connection point are destroyed.

After 30 seconds of in game time, the board is scored based on how much of the board each player controls. The first player to get two points wins the game! 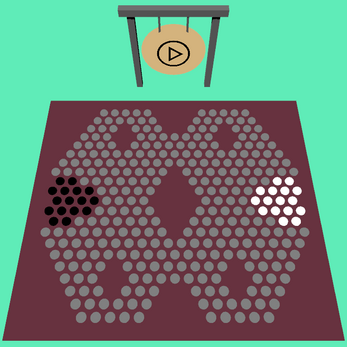